What keys do you need for gaming?

Hey everyone,
I wanted to get an idea of what people generally feel they need specifically for playing games. For example, I think a 75% is the perfect build for me for gaming. I play a good amount of FPS’ and will utilize the function row keys generally for healing.

That got me thinking to what everyone else uses and feels is a must have. Let me know your thoughts.

I feel like a 65% is the perfect size for me. 75% is nice too but a 65 has less switches to install/remove so therefore it’s better lol. I set up a layer so that the numbers can be F-row and the arrows are basically necessary in RDR2 which is my big game lately.

For gaming, none of these are anything I need to have (in fact, I can’t remember the last time I had a keyboard with a numpad on it). Now for general use/work…arrows. I literally can’t function writing code without them. So I’ll vote those, I guess.

Part of the reason I ask is because I saw the Wooting 60HE on BadSeedTech’s channel. His review is glowing on this thing for a gaming keyboard even though it does not have the arrow or function keys. However, the tech in the switches sounds pretty incredible. Curious to know if anyone is going to be going after this keyboard when it is released. Here is the video for those who are interested: 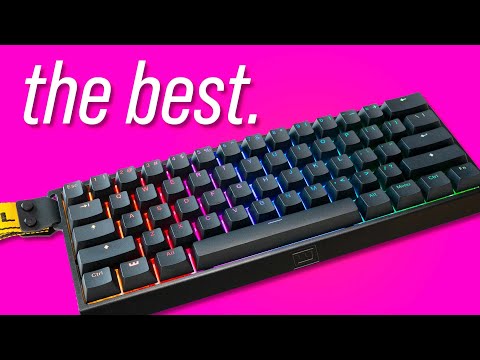 I learned pretty quick that 60% just aren’t for me, personally. So I don’t even bother looking at them anymore.

For typing, Im perfectly fine with a 65% board. I occasionally need the arrow keys to shuffle something, but I can survive without the rest of the keys.
For gaming, I’ve found 75% layouts to be a sweet spot for me. I honestly hate having to use layered keybindings when I game, and I find 75% boards give me everything I need. Admittedly, I play games that require A LOT of keybindings.

If my keyboard was just being used for PC gaming, 75% is perfect, however I do use my keyboard for work too and being in finance, I have to have my 10 keys since I work with numbers all day. So my gaming/work keyboard is a 96% is perfect to meet all of my needs in a single keyboard.

I got one couple weeks ago I love it.

Dude seriously?! I would love to pick your brain on how you like it. Have you tried the rapid trigger aspect? How do the switches sound/feel? Have you tried lubing them? Do they give you any extra in case of an accident during modding?

Absolutely love it so far…the technology in it is actually crazy. Sounds really good haven’t bothered to lube any of the switches or stabilizers. Definitely recommend it especially for the price! Switches are kinda heavy…not in a bad way but they aren’t super light I’ve heard the apex pro switches are really light but I think they sell springs and u can swap them to a lighter spring but I don’t mind how they feel. I use it on .1 and have the rapid trigger at .1 so it’s super fast. My typing has suffered but it has multiple profiles so if you really wanted you could have a profile for typing where it’s at a more normal actuation. Haven’t used the analog switches yet I’m excited to try out a racing game.

I can’t live without my arrow keys or, more accurately, I don’t want to

I’m having a bit of a conundrum right now because I really want to try an Alice keyboard (specifically the Keychron Q8 coming tomorrow) for the ergonomics as I have a lot of wrist issues and need to angle my keyboard when gaming, but on the other hand, none of those have the function keys and I’m worried that I’m going to end up needing them. On the one hand, for a lot of games they just bring up menus, so not super critical; on the other hand, for games like Monster Hunter, they’re used to switch between quick menus, which is actually pretty important and often done mid-combat. On the other other hand, I play that game with controller, so… Hmmmm.

Unfortunate that you missed this.

Not that unfortunate, in not spending $500+ on a keyboard

Not that unfortunate, in not spending $500+ on a keyboard

That’s fair, mine was a gift. Just waiting on it to get here.

Ya know, I’m more of a console gamer but I switch between my LOTR 65% and my GMMK 2 96% when gaming on PC. I don’t think I’d build another 65%, 75% (or a TKL) seems to be the sweet spot for me because I only need a numpad for work but if I lose the function keys (or go smaller and lose the arrow keys) I feel like I’m not getting my money’s worth. And I haven’t decided if I like the cramped keys on a 75% or even my 96%.

I’m fine with a 65%. In general I don’t play games that require a lot of keybindings or I use an Xbox controller because the game plays better with one.

I basically need a full-size.

For 90% of gamers, I’d be a 65% layout is enough, but I play Arma 3 which requires having a numpad and function row for some things.

The Tech that this board has is just amazing. The Analog Input is crazy, I would love to try it out on a racing or driving game. You would think Analog Input would have been integrated into board technology years ago but it is cool to see it coming into play on the Wooting 60HE, hopefully it is a great tech and gets good reviews and becomes an industry standard to be able to turn on Analog Input in the future