Just got these, and I am anxious to give them a shot in my GMMK Pro! But, I just got my Durock V2s tuned so nicely!

Anyone using these just lubed? 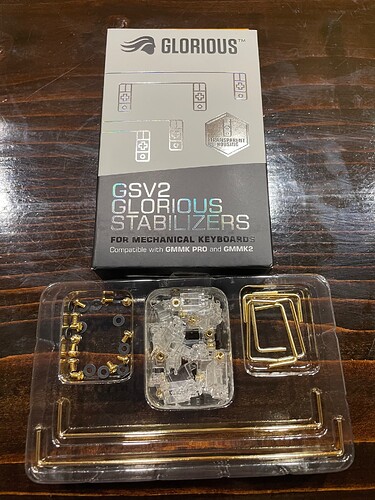 I was one of the lucky few to be able to test them before launch. The first thing I tried was Holee modding them, but I quickly realized that wouldn’t work. They’re fine with just a little bit of G-Lube

I just installed a set just lubed, they sound and feel great. I did get a defective pair in my set, but I only needed enough for a 65. Also had one that would stick down, can’t say definitively why, so I’ll blame over lubing, but I’ve done lots of stabs and never had this issue. Overall got the board done, and I’m happy with the results. Definitely the best value going for stabs.

Awesome! I was impressed on the tolerances to be sure! For $9.99 it’s an insane value, especially if you don’t have to Holee Mod or anything like that!

I like my Durocks, but if I don’t have to do all the special stuff to make them work the way they do… then I am all for it!

It was my experience that these stabs require SIGNIFICANTLY less lube than any other stab I’ve used. I over lubed first try. They are really nice when dialed in.

I did the same thing. Did the same amount I normally do on Durocks and it ended up being way too much

It was my experience that these stabs require SIGNIFICANTLY less lube than any other stab I’ve used. I over lubed first try. They are really nice when dialed in.

Yeah, I was wondering that as well, the tolerances look super tight. I know it’s not the same when you’re just playing around with them in your hands, but they seemed to have a lot less rattle just dry and loosely assembled.

I will keep this in mind when I go to do this! Thanks!

I did the same thing. Did the same amount I normally do on Durocks and it ended up being way too much

Do any of you use stabilizer pads with these? I usually have films installed on the PCB.

I haven’t. I may try something like it though. My space bar has a very harsh sound that I can’t seem to get rid of

Primarily why I use them, just tones it down a tad.

I just put little pieces of cloth bandaid between the PCB and the stabs.

I wonder if that is the reason mine have been getting stuck in my GMMK2, I lubed them with Krytox and Dielectric for the wire.

Possible with how tight they are, dielectric might be just too much for the wire. But, I can only comment with my experience with Durock V2s - I holee mod them with PTFE coated fiber tape. Which creates a tight tolerance… anything much thicker than 205g0 and its causes sticking, so I am just assuming the same is going to happen with the GSv2.

Only thin coat the wire ends with glube. Just brush it on to cover but just enough to do just that. Might work with a thin coat of dielectric, but DO NOT dip them. It’s going to give negative results if you do. Speaking from experience.

I just installed my GSV2’s in my first run GMMK Pro a couple weeks ago. Made quite the difference! Very happy with them. I did apply some Krytox 205g0 to them and some tape to the PCB so it never makes direct contact to it (didn’t have any bandaids lol). I get smooth motion and zero rattle from them so far.

Got my GSV2 installed last night. I have to say I think I like the overall sound and feel of Holee Mod Durock V2 better… but the thing is, for $9.99 or $5.99 and you don’t have to mess with modding them at all, it’s got to be the best thing out there for the price.

It is miles above the original GOAT Stabs, it’s not even funny. The GOAT Stabs are serviceable and can be tuned… and I would expect that kind of fiddling for a $9.99 set of stabs. So these GSV2s are an incredible deal.

I just installed mine. They are so much nicer than the originals