I feel like an idiot, but I’ve been trying to figure out how to set my keyboard to always have a white backlight on, and to also have Ripple Graff activate on keypresses. I assumed it could be done using the layers, but I haven’t been able to figure it out yet.

Can anyone let me know if this is possible, or how to do what I’m looking for?

I think I have figured it out. 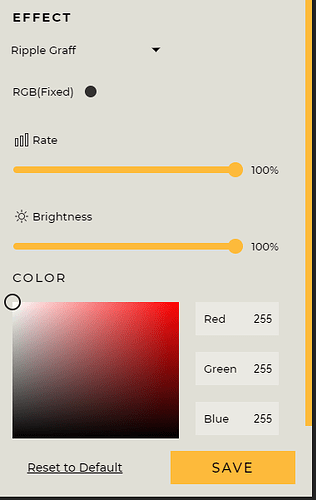 Make sure to set each color to 255 and select in the upper left of the screen. Hopefully the screen shot makes this clear. Let me know if this helps!

No matter what effect i select even selecting LED OFF the keyboard is always lit up red…switched profiles and everything. Not sure if i pressed something or im not pressing something. Maximized the screen like someone suggested…not sure if anyone else is having this problem.

Maybe try reflashing the firmware? If you are changing the settings and saving that seems to be the last option. Good luck my friend.

Give what @LiquidMaverick suggested a try and if that still won’t fix it, definitely reach out to our support team, as they may have encountered this before and know of a more specific way to fix it.

I actually took the eraser button thing to every key and now they will go whatever color/effect! Only thing now is for some reason only when I pick the effect where u press a key and it lights up that row, the sides constantly blink red like caps lock is on but caps lock isn’t on…probably something I pressed but even when I turn off blink when caps lock is on it still does it….probably just some button I need to press but it’s weird how it only does it with that effect.

Interesting, I was able to recreate this so I believe it is just an idea that wasn’t very good as each effect has a slight effect for the side light and for “Fast Run Without Trace” it just flashes what ever color you selected or if you select “RGB(Fixed)” it flashes through a cycle of colors which honestly is kind of a cool effect but really not practical if you are using the Indicate caps lock with blinking lights option as it won’t change the side light making the option useless when paired with this effect and the light constantly flashing is rather distracting. I also tried to fix it using the PER KEY option on the side bar and it flashes whatever you select it to be once but then goes back to the effect. I hope they change this soon.

If you mean change the effect from Normally On to Ripple Graff when ever you press any key I don’t think that is possible even with layers as you can only switch between them using the software or by setting a keybind to layer cycle up/down. Although that wouldn’t do it every time you did it. Also I just looked into and tried to record a macro to press a regular key and then the layer cycle down key I had set and it didn’t record the layer cycle down key so there isn’t even a super annoying complicated way to accomplish what you want from what I have seen.

Yeah, that’s basically what I’m looking for. Was able to set it up fairly easy with the Corsair software. I had my keyboard set to a constant white backlight, and then red ripples on keypress.