Does anyone know a keycap set that looks like GMK Stealth? I found out about this set too late so wasn’t able to get in on the group buy. It’s a black on black/grey set with minimal use of orange. There is a clone set I’ve seen around, but the colour is different and it goes a bit overboard on the orange.

Any recommendations of a black on black set with some greys and maybe different black tones instead of all 1 kind of black, would be greatly appreciated.

I’ll admit that I like the base set. I’m not a fan of the optional orange spacebars, enter key, extras though.

Drop has a Dark Dolch set that has a black-on-gray colorway. The grays are more cement and anthracite so this set is probably too light for what you’re looking for.

KBDFans has a standard set of Dolch caps that are white-on-gray/black in stock. If you willing to waitlist, they have a PBT orange-on-black set (Solaria). If you’re willing to wait even longer, they have an interest check right now for the Purpolch (purple + Dolch) set which is white-on-anthracite and purple-on-black. (Full disclosure: I’m on the interest list for Purpolch.)

Of course, you can allegedly get GMK Stealth kits if you trust buying things from AliExpress. 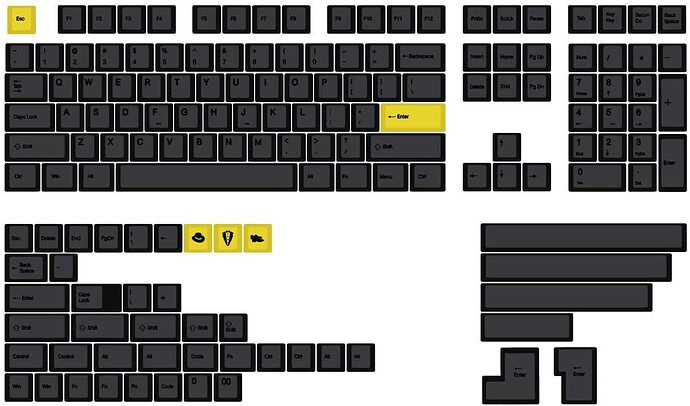 PBT Cherry Profile Dye-Subbed Keycaps. Profile：Cherry Pls pay attentions: Only including keycaps+Keycap box, not including other things. 152 All in one: The whole Set,but the 6U Spacebar can't fit Cherry 18xx, it only can be used at Razer MK. "C"...

@ghammock79 Thanks for all the sets to look at and for providing the links. I had a quick look, but will check them out again when I have time after work, much appreciated thanks! Yeah I did see the set on AliExpress but it was a bit heavy on the orange.

@ChronicMayhem Thanks for the suggestions, I’ll check them out! Much appreciated!

GMK Stealth is one set I was ticked I missed the GB for, hoping for ample extras to be in-stock once they make it through GMK production. GMK’s production has already pushed back the Analog Dreams R2 sets to Q3 so far (was originally set for Q2).

It’ll be a miracle if GMK ever actually gets back on track. The mistake was taking on more and more sets while being this far behind. I had a few sets that were supposed to be Q1/Q2 of this year (ordered Q1 last year) and are all pushed back to at minimum Q4 of this year (one of the sets hasn’t even entered production yet according to the status update from the vendor site) and is still very low down the queue.

Yea @DarthBaggins I hope they have ample extras too. I joined their gb discord to follow the progress of the production process, a lot of ppl waiting with no real updates atm.