I just got into Formula 1 in the last couple of years and was wondering if there were any other fans here? Especially interested if anyone has done an inspired board of your favorite team etc.

I am a big fan of Mclaren, and I am starting to search for things to make a Mclaren Gulf livery inspired keyboard. (Caveat, I am super new to mechanical keyboards so I don’t know how all of this works).

Excited to watch the Hungary race this weekend.

I’ve been into F1 for a few years now as well. Been trying to catch all the practices, qualifying, and races this season.

Oh that sounds awesome! Good luck getting those Sunday tickets for COTA!! Austin is a fun city on top of getting to go to a race. Always love Daniel Ricciardo putting on the cowboy git up: 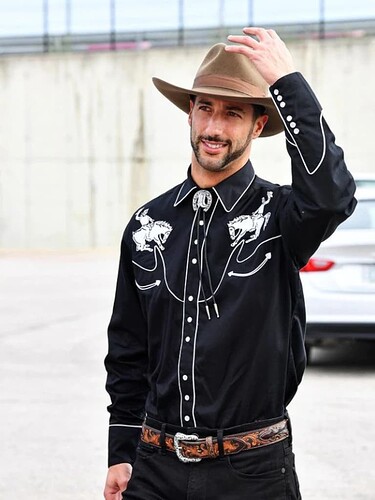 I’m in the same boat, been watching as many of the practices and qualifying sessions, plus the races too. What team or drivers are you routing for this year?

Been a Ferrari man since Schumi!
Heartbroken about LeClerc this year

Now that Kimi has retired, I cheer on Danny, Alonso, Seb, Mick, and Bottas.

Yea Austin is great, I live a couple hours from it.

Team wise, gotta root for the home country team in Haas! Lol. Probably my favorite team would be Red Bull. I’ve been enjoying the Red Bull/Ferrari battles this season.

Drivers wise, I mainly root for Max, Charles (I felt so bad for him this past weekend), Lando, Daniel, Lewis, Seb, and George (I did not agree with his POV on the Checo situation, I felt he pushed him off track). I’ve been enjoying Kmag too. He’s been doing so great driving as of late.

Yo. Been a Mercedes fan. Mainly support Lewis, but in the title fight, I’m praying for a LeClerc comeback. Wonder if Ferrari will get their shit together or throw away yet another championship due to team’s incompetence.

LeClerc this past weekend was a bit heartbreaking, as well as the whole season with Ferrari’s issues. Same with Sainz. That all said the battle between Ferrari/Redbull has been fun to watch. Also got to love the somewhat surprise comeback of Mercedes making it a bit of a 3 way battle.

I have to say I am a sucker for Ricciardo. I hope he can start turning his season around it’s been tough lately. Lando is fun to watch too, he is showing off some skill lately.

K-Mag has been killing it too. HAAS deserves a good season after last year, hahaha.

In case anyone has an extra few dollars laying around: 1998 Ferrari F300 | Monterey | RM Sotheby's

Anyone going to Car Week this year

Been watching F1 regularly for a few years now, but I can’t say I’ve really got a particular team I’m a fan of so I’ve never really gotten into making anything related to F1 fandom.

We’ve got a group chat at work for the handful of F1 fans in the office, and even in there there’s one guy who’s super into McLaren and nobody else has any strong team or driver allegiances.

I dont miss the a race for years, huge Red Bull fan, but also i love Haas and Alfa Romeo.

@d3L7r0n Would love to make it to Car Week, but don’t think it will be this year with work stuff. Are you going to make it?

Also, crazy news that Sebastian Vettel is retiring. (I guess not too crazy since he’s had a long career but still surprising)

Good race today. Max battling from P10 to P1 was great. Ferrari screwed themselves again with their race strategy. I don’t know what they are doing these days…

i have never been a huge follower of professional sports on any level but I have always loved watched F1 races here and there since the earlier-mid 2000s. i grew up racing motocross so anything motorsport related excites me. lol its super cool that the sport has grown such a huge fan base in the last few years. i try to watch the races when I can but its not very often unfortunately.

I recently got really into F1, watching both all the races but also the F1 22 game, and it’s been a blast! My favorite team would probably be McLaren, because of Lando and Daniel’s infectious personalities. It’s getting harder to love Daniel though, based on how poorly his performance currently is, but I’m praying it takes a turn soon!